Many children and adults suffer from eczema. Both of my children started breaking out in rashes from the time they were one month old. I have tried so many things some with success for a time but I never could find a permanent solution.

I wasn't willing to resort to steroid creams. I have used them when I have been desperate, but knowing the awful side effects I only used them very rarely.

So my story really started in April of 2010. I was desperate to clear up my little girl's oozing cracking rash on the back of her knees. I bought some cortisone cream and an all natural eczema cream.  I used them in combination for a week while keeping her off wheat. We generally follow a wheat free diet but we are not perfect. Her rash did clear up but it looked unnatural.

I quit rubbing the cream on and as I suspected the rash came back with a vengeance in a about a week. It was much worse and I believe the cortisone cream weakened her skin. For about a month after that I let her eat whatever was around including sugar. The rash just got worse. After a wedding in June where people kept commenting on her legs, I decided I would have to find a solution.

As soon as we got home from the wedding, I got on Google and found a website that really inspired me. This woman had the worst eczema I had ever seen. She recommended not eating wheat, sugar, or dairy. We had done all of those but never all at once. She also recommended certain supplements to take, most importantly enzymes, probiotics, and chlorophyll/spirulina. I would also add L-glutamine to this regimen. L-glutamine helps heal the stomach lining and that helps prevent undigested food from leaking into the bloodstream and inflaming the skin.

I got on Amazon and bought a box of Five-Lac (my favorite probiotic) and some Kidzyme (an enzyme, probiotic, L-glutamine blend). I also bought some kid greens but my kids wouldn't drink them. A few weeks after my children were on the diet I began to see improvements in their skin.

I also began to try different mixtures of homemade lotions. I mixed about 50% raw honey with my homemade body butter and applied it every night to my childrens' skin. I noticed a big improvement at first but then it tapered off. I did some more research and found a study that showed that bathing in bleach baths helped cure eczema. I wasn't going to put bleach in my children's bath but it did get me thinking.

The idea with the bleach is that once the skin becomes compromised bacteria and fungus can get in the rash and make it worse. If you kill the pathogens, the skin can heal. It made sense to me so I started applying a product called Staphoseptic to their skin. Again, I saw improvements but they also leveled off.

Finally, in October, after 4 months of dedicated diet, supplements and research my sister told me that Barefoot Butter cleared up her 6 month old baby's eczema. Barefoot Butter is a product I make for cracked heels. My 22 year old sister and my 16 year old sister had previously told me that is also cleared up their eczema, but I hadn't tried it because I had formulated it for cracked heels and didn't think it would work on baby eczema.

I tried the Barefoot Butter and I couldn't believe how well it worked. Within three of four days the rash was completely gone! The reason it worked so well is most likely due to the anti-bacterial and anti-fungal properties of Barefoot Butter. I definitely know that the supplements and diet were critical in this healing process. The enzymes were necessary to help my kids digest their food so that it wouldn't enter the bloodstream undigested. The probiotics were essential to kill candida which also inhibits good digestion and build up good bacteria.

Now that my kids are clear, I use Barefoot Butter to clear up an occasional breakout and I keep them on the Kidzyme almost every day. I only give them the Five-Lac about once a week or if they have eaten a lot of sugar.

I really hope this helps anyone suffering with eczema or have a child with baby eczema. I grew up with rashes everywhere until I was 16 and realized that I was allergic to wheat. Whole wheat still breaks me out to this day and again I now use Barefoot Butter to clear up my breakouts.


This is for information purposes only and is not intended to cure, diagnose or prevent any disease. 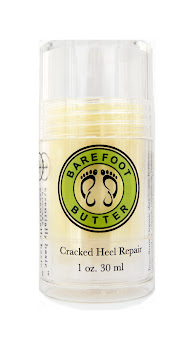